(In Order of Appearance) 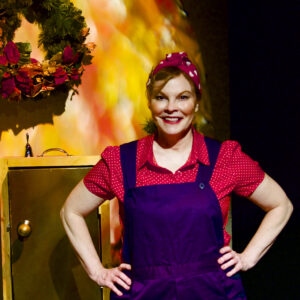 Shelli is thrilled to be part of this virtual production and for the opportunity to improve on her bell wrangling skills! Grateful thanks to director, Willow, and all of the talents that bring this classic to life for viewers. Happy holidays to all and may 2021 bring the end to all our humbugs! 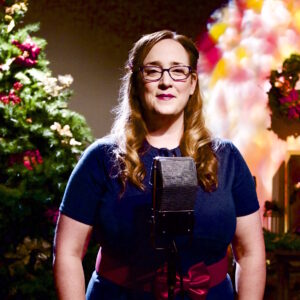 Last seen onstage at ACT last Christmas, Fin has spent 2020 working hard with the ACT board, and exploring a new career in voiceover. This show was a perfect excuse to test out her best “on-air” voice, with a 1940’s twist. The highlight for Fin was getting to read “The Night Before Christmas”; although a classic here in the US, it was not something she grew up with in Europe. She hopes this show warms your heart, elicits some old-fashioned chuckles, and brings you a little well-needed Christmas magic this holiday season 🙂 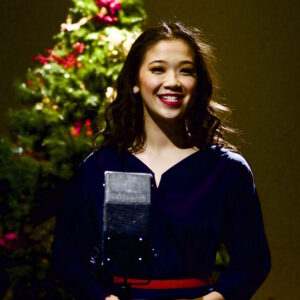 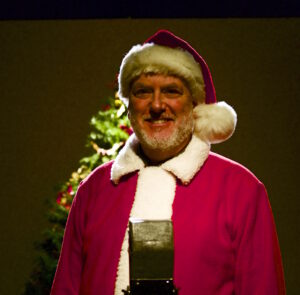 Don is happy to be making his virtual theatre debut in A Christmas Carol. He is a veteran of theatre, TV,  film, radio, and industrials. In fact, he used to make a living as an actor. Great work if you can get it. He was last seen on a Skagit County stage as Harold in Pray the Gay Away presented by TAG at the Lincoln Theater. His last role at ACT was Watson in Hound of the Baskervilles. During the day Don spends his time at Bay View School helping students learn to read. Special thanks to his amazing wife Sydney, awesome daughter Chloe who let him use her room during the rehearsal process and dogs Sparky and Scout who were mostly respectful during said process. 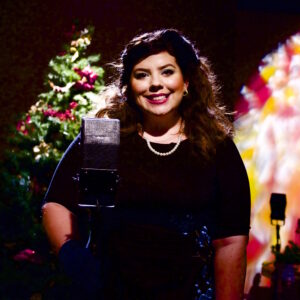 Susie Pollino is a recent graduate of Western Washington University. Susie is so excited to be in her first ACT show ever! Susie has been involved in many local productions such as ‘Side Show’ and ‘Into The Woods’. When she’s not on stage, Susie enjoys binging serial killer documentaries and planning all the fun places she’ll go after the pandemic! Susie is so grateful to be sharing the stage with her mom, Kelly. Christmas Carol is the first show Susie peer pressured her mom into auditioning for with her over seventeen years ago and she’s so glad she did! They’ve come a long way since Fundraiser #2 and Unnamed Street Orphan/Beggar #4. Merry Christmas, everyone! 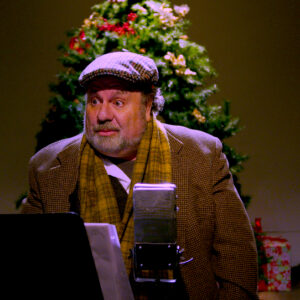 A young Charles Michel began acting back in the heyday of Dinner Theater in the 1970s, where he learned how to get laughs and and how to make people cry from many fading Hollywood and TV Stars of the Golden Era, as they chewed up the scenery for one last time in front of folks chewing up their food!   Along with directing and writing, he has made much of his living for over 40 years doing commercial voice overs. And he has coached hundreds of other actors on how to do the same. As a brand new resident of Anacortes, he is thrilled to be living in a place where a community of local actors still love chewing up the scenery! 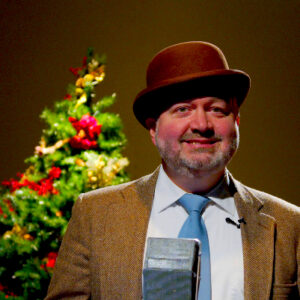 Mike Jenkins has been a part of ACT for the better part of the last twenty years,  appearing in over 40 main stage and fringe productions. He is very excited to be a part of the 1940s Living Radio Production of A Christmas Carol. Mike has soft spot in his heart for A Christmas Carol having made his theatrical debut at age 10 as Tiny Tim(in Sitka Ak) then 20 years later on the ACT stage as Fred and now playing the parts of Bob Cratchitt and Ghost of Christmas Present in this Production. Mike figures it’s just a matter of time before he gets to try on Scrooge’s pants and will be honored to do so. Mike married Ria Peth back in January so that was definitely the highlight of the year, but getting to act again is right up there! Mike would like to thank Willow for putting this production together, and of course his loving bride for all her support. 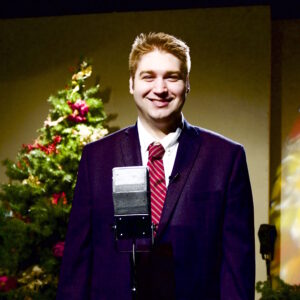 Josh Sharpe is a local actor and recent graduate of Western Washington University’s theatre program. Most recently, you may have seen him virtually in ACT’s Thank You, Ten! or in person as The Baker in META’s production of Into the Woods at the Lincoln Theatre. While he isn’t acting or working on his Master’s degree, you can catch him writing for The DisInsider or hanging out with his wife. A Christmas Carol is a story that has been close to his heart since he was young and he has had a wonderful time working on this new version with all of the talented people involved. He wishes everybody watching a very merry Christmas! 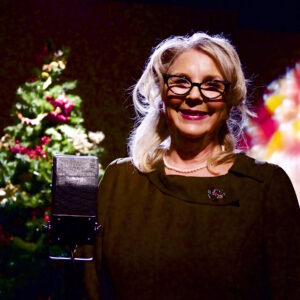 Charity Seeker, Woman 1, Ghost of Christmas Past and Singer

Kelly is thrilled to be a part of this production of A Christmas Carol!  Fun fact – her first foray into community theater was in 2003 playing the ‘charity seeker’ in TAGS ‘A Christmas Carol’ also!  During the day she works at the Burlington Police department.  She’s been involved in several shows at ACT including ‘Calendar Girls’, played in the orchestra for “Les Miserables”, “Oliver” and “Little Shop of Horrors” and has been in the Revue.  She has been in many  productions around the valley with some of her favorites being “Mama Mia” (Rosie) and “Always, Patsy Cline” (Louise).  She also participates in Skagit Valley College radio theater and is one of the founding members of the local band, Mama Dirty Skirt.  She would like to thank her husband, Joe, friends and family for always supporting her love of the arts! 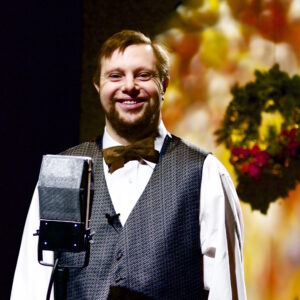 Anthony started his theatrical career with “Wizard of Oz” at Anacortes High School.  Later he performed in The Three Musketeers, Christmas Carol and Alice in Wonderland with Aktion Theatre.  He also participated in Class ACT Music Revues and The Best Christmas Pageant Ever at ACT.  Anthony thinks Christmas is the best time of the year. 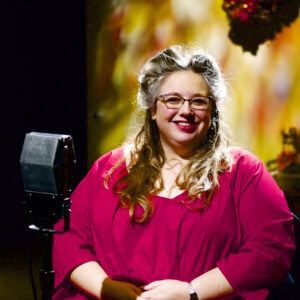 Eal is excited to be back with ACT. This will be her third radio production, but the first onstage. Last seen onstage with Skagit River Shakespeare festival as Maria in Twelfth Night. Prior was captivating as the head maid in King Lear. More recently she could be seen as an ensemble ‘maid’ of King Lear, as a brawling brothel babe in Romeo & Juliet and as the crazy Schoolmistress in Two Nobel Kinsmen. Since then she was previously seen on the ACT boards in partnership with SNW as Queen Elizabeth I in SNW’s partnership show Shakespeare in Love and previously at ACT as Mrs. Beaver in The Lion the Witch and the Wardrobe, Ida Mallard in HONK! and as Martha Dobie in The Children’s Hour. When she is not on stage she is in the director’s chair or behind the scenes. She is The former Managing Artistic Director for Shakespeare Northwest and has been active with many of the theaters in Skagit Valley. When she has any free time (what is that?) she enjoys spending time with her family and friends, reading and watching too much TV. 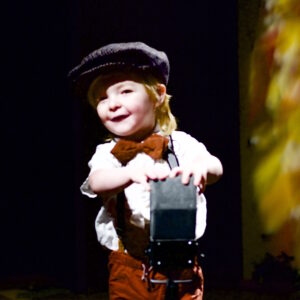 Nikolai Bannister is slightly confused but very thrilled to be part of his very first show at Anacortes Community Theatre. Niko has been destined for the stage since birth, attending all of the 9 To 5 The Musical rehearsals with his mom since he was 4 months old. Were he to write this on his own, we could only be certain he’d thank his loving family (Mama, Dada, and Hadley) for practicing his line with him. 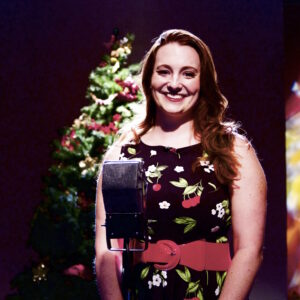 Kendra Moore is thrilled to be making her ACT debut in a Christmas Carol! Previous roles include Christine (Phantom of the Opera), Cinderella (Into the Woods), and Velma (Chicago). By day Kendra works as a chemical engineer for Phillips 66. Kendra thanks you for supporting the arts virtually and hopes this production brings some holiday cheer to your celebration! 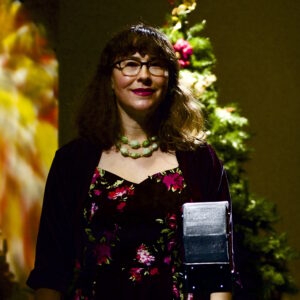 Liz was last seen as the Wicked Witch of the West in the 1998 Anacortes High School production of The Wizard of Oz and is thrilled to return to the stage in her first production at ACT! She lives in Anacortes with her two kids and loves to hike and lakeswim, ride roller coasters, garden, and travel, and is known far and wide for throwing impromptu dance parties and shredding at karaoke. Liz loves the holiday season and old radios and was quoted as saying, “I felt like the role of Wife was written just for me!” and looks forward to more theatre antics with this amazing crew in the future. 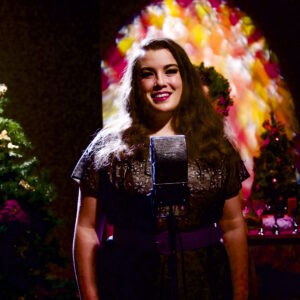 Katie recently co-directed ACT Theatre’s virtual production, A Night Out, and is excited to be back on stage for A Christmas Carol. Katie enjoys performing in and directing mainstage productions and especially loves directing for Class ACT. You may have seen her most recently on stage as Doralee in ACT’s 9 to 5: The Musical. Katie likes cookies, her pup Franny, reading, and hanging out with her cool new husband. 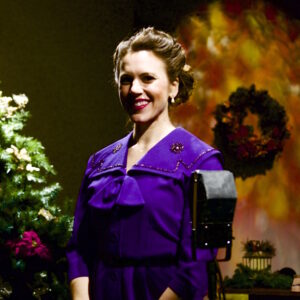 Karen was last seen on the ACT stage as Schwartzy in The 25th Annual Putnam County Spelling Bee and as Marian Paroo in The Music Man. She is a high school French teacher and enjoys spending time with her husband and 3 year old daughter 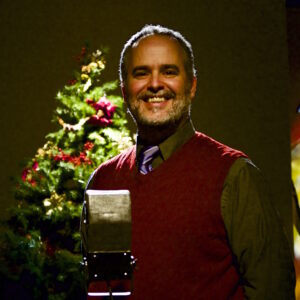 Tim is delighted to have been able to contribute to this virtual production! This is his first time participating in A Christmas Carol, but his very first show ever was another Dickens classic: ACT’s production of “Oliver!” in November 1998.

When he is not virtually treading the virtual boards, Tim enjoys long, coffee-fueled walks with his wife, hanging out with his two awesome sons (ages 15 and 12), and painting tiny models and then playing games on big tables with them.  He also works for Western Washington University working as a programmer and server infrastructure administrator.

Over the last 20-some years, you may have seen Tim acting and singing in some of ACT’s other shows. A few of the most recent include Grasshopper in “James and the Giant Peach”, Matthew in “Anne of Green Gables”, Man in the Chair in “The Drowsy Chaperone”, and Sheriff Joe in “Spitfire Grill”.

Willow has been a part of ACT for twenty years as an actor, director, writer, stage manager, producer, light tech and crew member.  She works as ACT’s Office Administrator and the Class ACT Coordinator.  ACT is her second home and she loves everyone involved like family.