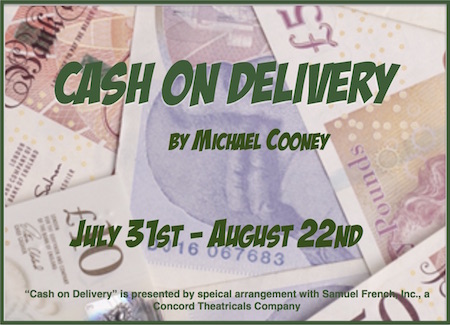 Auditions will be be held at the Anacortes Community Theatre Annex building.  Located at 1020 11th Street, Anacortes, WA.  (Across the street from Sebo’s Hardware.)

Auditions will be cold read from the script.  Perusal scripts are available at the ACT Office. (918 M Avenue.  Anacortes, WA.)

The panicky mayhem kicks in early and never lets up, and the ludicrous plot is developed with an insane logic that touches on the inspirational. And while the play’s subject matter is topical, the farce is as reassuringly familiar. Huge-chested old boots are groped in the mistaken impression that they are chaps in drag, dead bodies that aren’t really dead are subjected to terrible indignities and Michael Cooney seems touchingly convinced that he is the first writer ever to have considered the comic possibilities of the word “Uranus”.

Age estimates for the characters are flexible. The actor should be able to “play” the age range

Eric Swan – (30s – 40s). Unemployed businessman. Feels trapped by a situation of his own making and doesn’t know how to get out. Smooth talking. He is afraid of disappointing his wife.

Linda Swan – (30s – 40s) Eric’s wife, loving and sweet, at first. Very concerned about her husband and on an emotional edge. Her emotions do get the better of her at times.

Mr. Jenkins – (30 plus) Department of Social Services (DSS) inspector. Dull paper pusher who thinks he is a lot brighter than he really is. He is afraid of Ms. Cowper.

Uncle George – (50 plus). Eric’s Uncle and partner in crime. He considers himself a mover and shaker on the edge of the law. A physically demanding role even though George spends much of the play unconscious on the couch. Must be light enough to be picked up by two men attempting to put him head first in a plastic bag.

Mr. Forbright – (40 plus). Funeral Director. Professional without a sense of humor. He is aghast at some of the things he sees

Dr. Chapman – (late 20s – early 30s) First day on the job marriage counselor / relationship arbitrator. Overwhelmed in his position and easily bullied by the rest of the cast.

Ms. Cowper – (50 plus) Head of the DSS inspectors office. She is accustomed to being very much in charge. The script calls for Eric to mistake Ms. Cowper for Norman in drag. He proceeds to grope Ms. Cowper’s ample bosom. We intend to conceal the actor’s natural bosom and cover them with an oversized stuffed bra identical to the one Norman will where.

Brenda – (20 plus) Norman’s fiancé. Brenda shows up very late in the second act concerned because Norman was acting strangely on the phone earlier. She must react as she is told 1) Norman is already married and 2) Norman is dead. Neither is true but she doesn’t find that out until later.